The opening round of the 2014 ARR Craib Scottish Rally Championships set off in Inverness at the Arnold Clark Thistle Snowman rally last Saturday.  The Snowman rally would also be the first event of the year for Kinross 18 year old Blair Brown, driver of the Peugeot 205 1.6 GTI, backed by QTS Group. Preparations for the rally began early and a test day was complete the week before, allowing Blair and Co-driver Richard Simmonds from Duns, to settle into the car ahead of their season opener.

Blair who is the 2013 and 2014 Royal Scottish Automobile Clubs New Talent Scholar set a strict objective to finish the rally at all costs whilst setting times to the team’s class rivals.  On entering special stage one, Millbuie, Blair and Richard were met by a slippery but fast forest lined with spectators and after a clean run the duo were second fastest in class three in their humble Peugeot 205.

With the team delighted with the first stage it was off to special stage two. After tackling the first two miles with aggression Blair hit a deep pot hole which had formed in front of a concrete river crossing, on opposite lock. The hit resulted in a broken drive shaft. Without hesitating the crew lept into action to change the driveshaft on stage, a task which even in a well equipped garage may take some time. With their simple tool kit and small jack only used for changing wheels, Blair and Richard replaced the driveshaft in just over 15 minutes. The team finished the stage and were back in the rally.

Although all hopes of a top end finish were lost the crew still had the point to prove that they will be the ones to watch this season. So with little to lose Blair and Richard were ready to go for the mid day special stage. With the daunting thought in the back of Blair’s mind whether the replaced shaft would hold together and even the thought of the wheel nuts not being tightened the pair of focussed competitors set off into the packed woods for a third time. With no idea of what sort of time the team had set the crew arrived back at service covered in mud and soaking wet to find they had won the stage in their class by a healthy margin of 13 seconds.

But there was no time to celebrate, the old but trusty Peugeot 205 1.6 GTI developed a misfire on the way to service, which thanks to the expertise of the BBR service team was fixed quickly and the team were ready for the final leg of the rally.

Special Stage four was the longest at 12.10 miles long. After reaching the midpoint of the stage the crew were caught out by a front puncture and with little opportunities arising for safe places to change the destroyed tyre and wheel, the team battered on to the end of stage.

Only one stage was left to be complete, Blair and Richard were back into their tool kit once again to change the tyre when a warning light appeared on the dash board. It had appeared that Polly dropped water and the car was running hot. After getting water into the car again the driver and co-driver moved onto the last stage, hoping to cruise the stage and gather the remaining points left for the day, but it did not seem that a cruise was what was in mind. After exiting the last stage of the day Blair and Richard had again won another stage in their class by two seconds.

‘I am extremely happy with our result today even though some people may not be of the same opinion if it was to be theirs. We have won two stages and come second in another. We have been battered with problems and have resolved them. At the end of the day I think I have learnt more today than I did in half of last season. I can’t wait to get to the Border Counties Rally in March to prove we can and will do it’

‘Enjoyable, frustrating, promising, delicious and educational are words that can be used to describe the 2014 Snowman Rally. Enjoyable being part of an enthusiastic rally team. Frustrating, breaking a drive shaft and getting a puncture. Promising, our times were up there with the best in our class. Delicious, the soup and burger in service. Educational, things we learnt just to get to the finish. As I have been told by somebody much wiser than me that is rallying.

At the end of the event Blair and Richard finished fifth in class three and 69th overall despite their very difficult day.

Blair, Richard and the rest of the QTS Group BBR rallying team will be next out at the Brick and Steel Border Counties rally on March the 22nd in Jedburgh. The team will be in their newly built Peugeot 205 1.6 GTI and they will be ready for a fight. 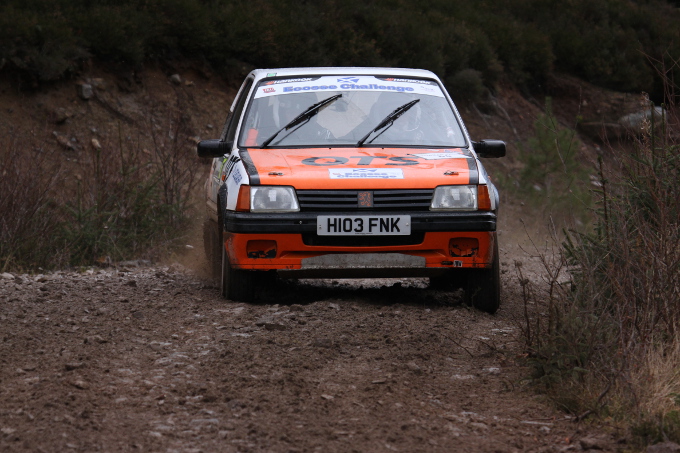