Local Kinross teenager and Edinburgh College student Blair Brown scored a best result yet of 3rd place in class at the Brick and Steel Border Counties rally last weekend in Jedburgh. The young rally driver who has been awarded the RSAC Motorsport New Talent Scholarship for the second year in a row tackled the five tough stages along with Co-driver Richard Simmonds from Duns. The BBR Rally team who are backed by QTS Group fought through Snow, Gravel and Ice to bring back their maiden top three finish.

This event was not only the first round of the Peugeot 205 Ecosse Challenge, but it was also to be the first outing for the teams new car. In weeks prior to the event the team were working night and day to get the new Peugeot 205 up and running, but after some technical issue the team were forced to resort to using their old trusty car. Although as gutted as the team was to have not reached their deadline, their spirits were not dampened.

After a very positive and clean test session the day prior to the event Blair was delighted with the car setup. Along with the great weather conditions it was looking like this event would be a fast one. On Arrival to the first stage of the event, Blair and Richard were shocked to find snow lying on the stage. This was not to fear them as the pair stormed through the first two snow and ice covered stages, setting a third fastest time in class for both, in what was extremely difficult conditions.

It was back to service for the morning halt where Richard and Blair were disappointed in their third place, it was to be a full push from then on for the following three stages. The 205 challenge team proved they are contenders for the championships as they won the next stage by four seconds. This was achieved through sheer determination, confidence and talent from the duo to beat the stiff competition of their experienced rivals.

Sadly after such a fantastic time through stage three, the trusty 205 developed a miss fire at the start line of the stage four. Blair and Richard had to nurse the car along all nine miles of Forrest road to the finish where they could get the car back to service to be fixed in time for the last stage of the event.  Although the duo dropped almost a minute on the previous stage they still held third position. With nothing to lose Blair admitted he was not going to hold back on the last stage and he held his word at that by setting another fastest time of the day.

‘I am delighted with our third place position this weekend, although I was hoping for a win. The tricky conditions and mechanical problems prevented us from getting the silver wear but our times show we will get it very soon. We have good starting position for the season and I cannot wait for the next event.’

‘Delighted to make it to the finish of the Border Counties Rally after last year’s stage one exit. Stages one and two saw several inches of snow lying providing difficult driving conditions which Blair coped with well. Our pace increased with two fastest 205 stage times in the final three stages proving we have the pace to be a front running crew. Frustrated but looking forward to the next round’ 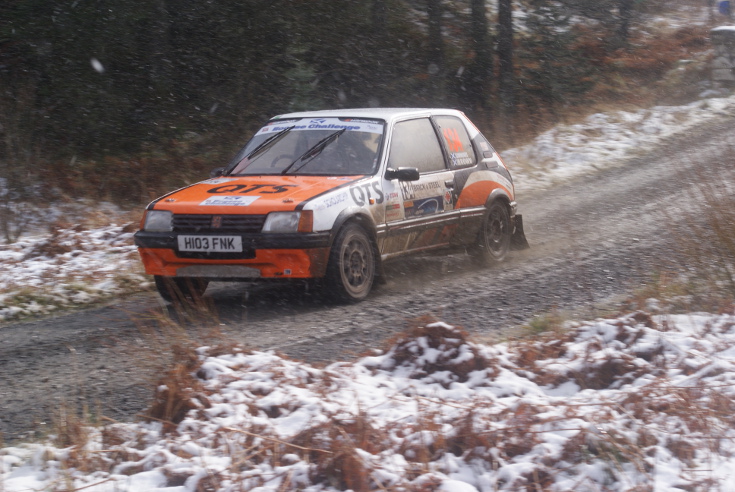