Baked by QTS Group, Kinross shire teen Blair Brown finishes top of class at the 2014 Pirelli Richard Burns Foundation National B rally, based in Carlisle, the 18 year old Peugeot 205 driver of team BBR is the 2014 RSAC New Talent Scholar. The borders based rally is round one of the 2014 British Rally Championships and contest over two days. Blair’s regular co-driver, Richard Simmonds from Duns, was unavailable for the teams fourth gravel event of the year as he was competing in the Berwick Classic with his father where they won the event. Stepping into Richards shoes was Lockerbie based Michael Curry who would take on the fast forest roads of Kielder.

The Saturday national B event consisted of three stages covering 26 miles. Prior to the start of Blairs event the British Rally cars had already completed the three stages twice over leaving the national B’s to fight over the rough conditions left.  These conditions would not fault Michael and Blair who put down a faultless stage time to start their lead in class 10.

It was straight into stage two of the national event where gearstick issues continued from the previous event, The Granite city Rally. Blair and Mike were set on another class 10 stage win. Stage two was the longest of the day at 10 miles and with the continued rough conditions the QTS Group 205 set off into the forest for the second time winning the stage in their class yet again.

The third and final stage of the day was the fastest and with much to learn about the car and much for Blair to still learn about driving, the team were ready for another push to find their limits.

Blair Brown: ‘Stage three was amazing, it started off fast and then went into a nice flowing section. We had a big moment on a left 8 which probably should have been a left 9 in the notes, so I think we went through the corner half in the ditch with one wheel in the air but we kept it going. I also checked the trip meter in the car at the end and we had reached just less than 100 mph on the stage. Not bad for an old 205’

Blair and Mike finished fastest in their class again and took the class 10 win for Saturday. Sunday took a different turn where team BBR were entered again into the National B rally. The first stage was covered in thick fog, preventing the drivers from seeing more than 50 yards at times. The pair finished fastest yet again in class 10 but sadly on the start line of stage two the gearstick snapped on the Peugeot 205 and the event was over.

The BBR Rally team would like to say a massive thanks to their sponsors QTS Group who provide them with such great support and enable them to compete at such a high level of rallying and continually progress.

The next event for Blair and the QTS Group BBR rally team is the Jim Clark Rally from 30th May to 1st June. 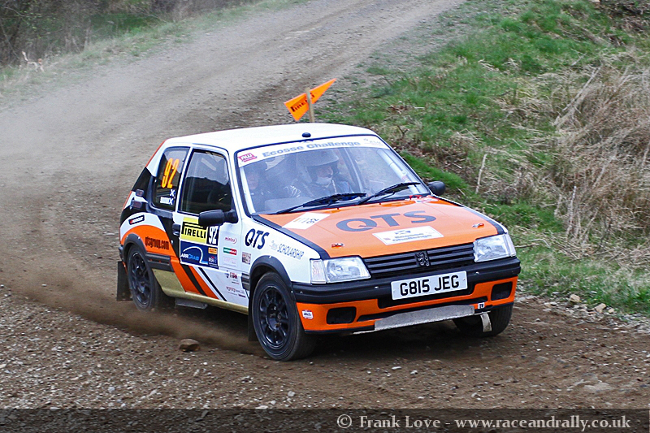 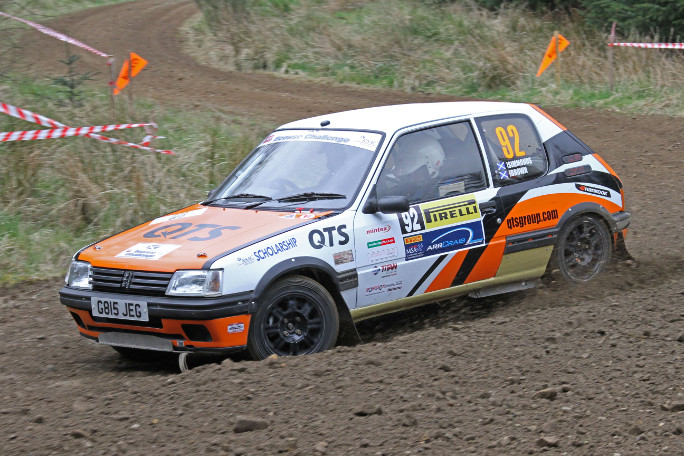