With 17 cars, a very good quality entry list and warm dry weather and a good selection of tests, a good day was on the cards. 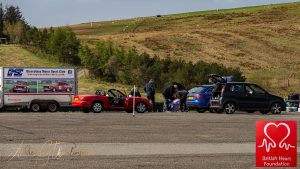 There were some very close battles across all the tests and the classes, the closest being between father and son, Jim and James Wilson after 13 runs and 5 tests Jim was faster by 0.2 of a second. The fastest of the MX5s was Daniel Rae from a field of 7.

Gordon Clendinning was on top form with his VW Buggy and gave us a masterclass in Autotest driving. James Morrison in his Mini Special was nipping at Gordon’s heels all day, but 1 bad test was enough to drop him to 3rd behind Paul Davidson who put on a very impressive drive in his Seat Mii. 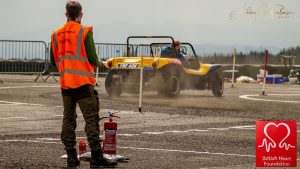 and adapted very quickly to win this discipline.

This was the first event we had been allowed dual occupancy since Lockdown and the well supported PCA was won by Ian Forgan closely followed by his son Kyle,

in a car with an intermittent misfire.

The abrasive surface took its toll on tyres with many competitors having to change them during the day as they were worn down to the steel braiding.

Gordon Clendinning emerged the winner by 24.7 seconds from Paul Davidson then a gap of 3.9 seconds to James Morrison. 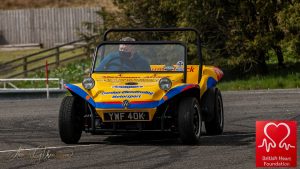 Overall it was a fantastic day, meeting people face to face rather than on a screen, lots of smiling faces, great tests, good weather and a return to Motor Sport in Fife.

Bill Creevy and his team have been running this charity event to support The British Heart Foundations for 19 years and this years contribution of £515.00 is the most we have ever raised, next year will be the 20th Anniversary so we will have to make it a special one.

Finally, a huge thanks to Glenrothes Motor Sport Club, Knockhill Racing Circuit, the Wilson family and everyone who has supported this event over the years, all your contributions will have made a significant difference to the BHF. 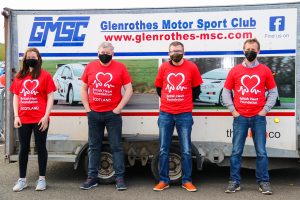