The aim was to make the 20th Anniversary of this event the biggest and best so far and we pretty much succeeded with 19 very good quality entries, 3 challenging routes for the competitors and a record donation raised for the BHF.

There was a good selection of cars from mini specials to the beach buggy, 8 MX5s and a triple entered Vauxhall Astra. 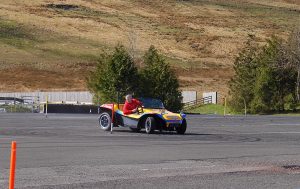 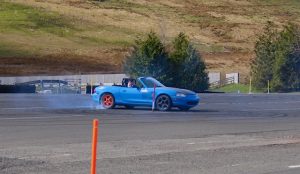 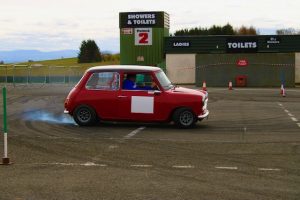 The day started off very well with the sun splitting the sky, but later in the day that all changed to driving rain and freezing winds making driving conditions very slippery.

First casualty of the day was James Morrison in his Mini Special with a broken driveshaft, as he did not have a spare he had to retire, another driver to suffer transmission failure was Des Campbell who is more often seen  driving his Peugeot 206 Rally car very rapidly.

This event was a bit of a family affair with 4 father and son partnerships entered generating a lot of very close battles during the day.

Jim Wilson won the front wheel drive class driving the Mini that his father Andy had built more than 20 years ago, closely followed by Jim’s son James. Martin Watterston was entered in the GMSC Ka but a constant misfire  dropped him down the order.

The battle of the MX5s was decided in favour of Martin Gillespie closely followed by Gary Clark, Championship sponsor Olly McCollum finished 3rd in class.

In the PCA class Des Campbell had been leading until Diff failure put him out.

Gordon Clendinning was in a class of his own giving us a master class in precision driving, he makes it look very easy but this takes a lot of talent.

After 16 tests the victory went to Gordon Clendinning in his Beach Buggy, second place was only decided after the very last test in favour of Martin Gillespie in the Mazda MX5, Jim Wilson was 3rd only 5.6 seconds behind. 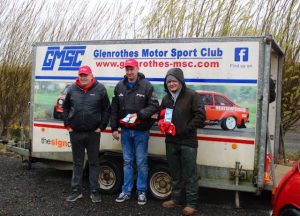 Despite the inclement weather a great days motor sport was enjoyed and we raised a record donation of £735.00 for the British Heart Foundation.